Do you use Reddit?: Six percent of American adults online do 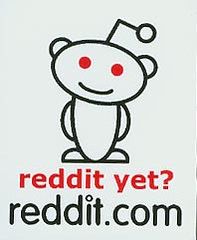 Reddit is the self-proclaimed front page of the Internet — a community of people who submit links and vote them up or down based on their quality, novelty or general ability to generate amusement.

One interesting thing about Reddit, is not that it has great growth opportunity as a social network, but rather, it’s a database that is easily built on. What I mean by that is, it has great infrastructure. Just like how Google allows mobile app developers to built applications on top of Google’s operating system, Reddit allows anyone to build on top of their platform. In fact, you can see one example here.

As I just said, Reddit is a database. A database controlled and maintained by its users. If a user posts incorrect information, or spams a subreddit, the users vote the content down and can even have the user account banned.

Teens that grew up with Facebook are now in their mid-twenties, and the whole idea of the NSA, the idea that Facebook sells and profits from selling massive amounts of user data is an uncomfortable thought to say the least. Facebook asks for an email, your full name, your date of birth, and a lot more if you’re willing to give it up. What’s reddit require? A username and password. If you really want to dive into it, reddit may ask you to verify an email address to make sure that you’re a real person. Quite a difference as compared to Facebook.

The Pew Internet and American Life Project claims that 6% of all American adults online said they’ve visited Reddit. So what? That hardly competes with Facebook’s 1 billion+ users, right? While that’s not a staggering number, it still puts Reddit on par with Tumblr. Young men are the most likely to use Reddit. About 15 percent of male Internet users between ages 18 and 29 say they use the site, compared with five percent of women of the same age.

But the fact that Reddit is getting this kind of analysis at all reflects a growing awareness about the site.

While it’s still an online spot for simply finding something amusing — case in point: this intellectual joke thread that’s gone viral in the past few days — Reddit has also been used as a forum for political action and for tapping into the flow of online discussion. Many politicians and political activists have used reddit as a grass-roots support. In fact, last year the reddit community welcomed President Obama to participate in its regular (mostly) open question-and-answer sessions, which the community refers to as an “Ask Me Anything.” Not surprising seeing as though Obama had been known for targeting the youth.

“Reddit also got users’ attention in the wake of the bombings at the Boston Marathon. Reddit users submitted their theories about the bombers after combing through images and footage of the marathon. While none of those particular leads led to the arrest of bombing suspect Dzhokhar Tsarnaev, news outlets picked up on some of the theories and reported them as if they were genuine law enforcement tips.” ~Source

What does all this mean?

All of this points towards one thing: Reddit is on the rise. Last week, the company reported 71 million unique visitors, and claimed that it was on track to hit 5 BILLION page views this year. Last year, the site reported about 2 billion page views for the year and 34 million unique views in a month.